In this review, we will talk about an updated version of the professional laser level of the “GLL3-330″ line with the ability to build three red planes – 360 degrees each. Plus, such an optical scheme always has a full-fledged plumb line.

Such a newcomer is the Bosch GLL3-330C 360⁰ laser level. The prefix “C” stands for – Connection. This suggests that the layer supports Bluetooth wireless communication, but more on that later…

By the way, some models of Huepar laser levels also support Bluetooth. For example – the leveling Huepar 603CG level with the prefix “BT”. Excellent quality level at a lower price.

Takes the top places in the ranking of the best 3D laser levels.

Protection of the housing from dust and moisture according to the international standard has the code – IP54. This is a standard frequently encountered protection. But sometimes you can find a higher protection – IP65, as for example in the 3D laser level Firecore F94T-XG.

The Bosch GLL3-330C laser level is made of high-quality composite plastic. The upper and back parts are covered with a thick layer of rubber. All connections of the parts are made with very high accuracy.

The construction difference from the younger model GLL3-300 360° is the battery compartment. Which is placed on the back side. And which has several use cases.

Now the laser level can work both from 4 AA batteries through a special box adapter, and from a 12V lithium-ion battery.

Unfortunately, the device does not work directly from the electrical network.

The Bosch GLL3-330C 360⁰ laser level is equipped with a magnetic compensator with a pendulum. This is the standard for almost all laser levels, except for models with an electronic compensator on servos. For example, like the Firecore FIR-GL8-EA with cylindrical prisms.

When turned on, the compensator is installed almost instantly. The time is only 1.5-2 seconds. Agree it’s really fast.

When the device is deflected by more than 4°, the laser lines start flashing to the accompaniment of a loud beep.

The sound can be turned off by holding down the “laser” and “working with the receiver” buttons for 5 seconds. After that, a single signal will be heard.

OFF – the device is turned off (transport mode).

ON position (closed lock) – operating mode with a locked compensator. It is used for marking any inclined lines.

The main control panel is located at the top of the laser level Bosch GLL3-330C. It has undergone a number of changes and now looks like this:

Algorithm for switching planes at the Bosch GLL3-330C laser level

When you turn on the device for the first time, the horizon immediately lights up. Subsequent pressings of the “laser” button to switch over as follows:

Thus, if necessary, you can choose either one horizon or one vertical. But to get a laser cross on the wall, you will need to turn on all three planes.

Today, laser levels capable of projecting 3 planes at 360 degrees are in my opinion one of the most successful solutions. If one horizon is not enough, then you can consider 4D models, for example Huepar 904DG or Fukuda MW-94D-4GX.

Plus, when the verticals at the top and bottom intersect, they form full-fledged plumb points.

We all remember the usual thread plumb lines. Pulling the thread in the plane. How much time and effort was spent on the banal installation of lighthouses when leveling the walls. Now it happens much faster.

The Bosch GLL3-330C 360⁰ laser level has a tilt function, which allows you to make markings in non-standard projects.

The working distance with the special Bosch LR8 receiver has been increased to 120 meters in diameter or up to 60 meters in radius. Agree to make a marking of such a distance in the sun on the street is not bad enough.

The construction of laser levels with conical prisms allows you to project planes as close as possible to the walls and ceiling. This greatly affects the convenience and speed of work.

The distance from the line to the wall of this particular model is slightly less than 2 centimeters. We can not say that this is a lot, but more often in such laser levels, this distance is equal to one centimeter.

A distinctive feature of the Bosch GLL3-330C from all similar laser levels is the “CAL guard” function. Which, with the help of built-in sensors, constantly monitors the device for malfunctions after impacts or use at elevated temperatures. And also just about the need to check the calibration once every 12 months.

The notification will be a glowing diode at the top of the control panel – “Cal”. More information can be found in the app on your smartphone.

If the device does not receive power from the battery, then the power for monitoring is a “tablet” battery. Which is located on the back of the laser level behind the battery compartment. It provides 72 hours of continuous tracking.

Communication between a smartphone running on the Android or IOS operating system is carried out via Bluetooth and a special application that must be downloaded from the Play Store or Apple Store. It is called – “Bosch Leveling Remote App”

The application has a number of functions for managing the level:

Let’s start with the minimum brightness

The differences are not so noticeable but they are there.

The line thickness test at 5 meters showed a result of 1.5 mm

And when tested at 10 meters, the line was 2mm!

In terms of fastenings, everything is like everyone else’s, nothing ordinary. The base of the Bosch GLL3-330C 360⁰ laser level has two holes with a 1/4 and 5/8 inch thread.

Thin and bright beams, brightness adjustment to save power, work from 12V or simple batteries, the ability to turn on the planes separately, increased range of work with the receiver, high-quality housing and assembly, remote control using the phone, monitoring the device, disabling sound alerts.

High price, no work from the electric network.

Review of the SNDWAY SW-S120 laser measure with integrated video camera
Today, it is one of the best low-cost laser measure
61.8k. 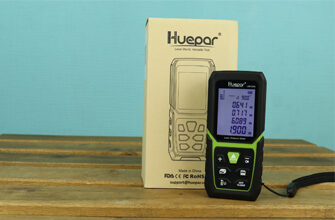