I would like to note right away the very thin green laser lines at different distances (see photo below in the review).

The Kaiweets KT360A laser level can absolutely be placed in third place in the list of the best 3×360° laser levels. And that’s only because it doesn’t have bluetooth and a screen with tilt angle display, if it did, it would be definitely 1st place.

The build quality of the housing and materials in general deserves all the praise. Excellent thick industrial plastic, in some places covered with dense black rubber.

The mating of all parts is very accurate with even gaps. There is nothing to complain about, everything is really done at the highest level.

In general, I want to say that this model gives the impression of such a monolithic strong nut, and quite weighty. Nevertheless, its housing is easily and conveniently disassembled, for revision or adjustment of accuracy, if necessary. Let’s talk about calibration below.

The protective towers are very massive, made of metal, and fastened with four bolts.

The designers of the Kaiweets KT360A laser level made an interesting tower construction that I have not seen before.

As you can see in the photo below – the glass unit is additionally attached to the tower from the inside. This creates a kind of protective module, which is then attached to the housing through a rubber edging around the perimeter.

As a result, this whole construction of the protective tower is quite good protection against dust entering the inside of the device.

Another plus is that the glass in the protective towers is very recessed, so it is very difficult to break them accidentally. Also, it is almost impossible to smudge them with your fingers. You can pick up the tower directly without fear of getting the glass dirty.

I would like to point out the very neatly made marking laser modules. Which, by the way, end up with a very thin line. See the photo reports on line thickness at different distances of the Kaiweets KT360A laser level below in the review.

As for the battery, here it is also of increased capacity – the device is ready to work almost a day without stopping with two switched on planes, it really is not a little.

The Kaiweets KT360A battery is quick-release, but it attaches perfectly and tightly. I caught myself thinking that if I don’t take it off for a few days, I don’t even immediately understand how it comes off – so it fits perfectly, ok, that’s all a lyrical digression.

The battery case is made of that thick plastic, and is also covered in black rubber. On the front side is a four-step charge indicator. Just below under the thick rubber overlay is the Usb Type-C port.

On the inside there is a contact group and battery specifications.

Another plus is that the battery is collapsible. Inside are installed: the controller and 3 pieces – the most common rechargeable cells 18650.

Which, if you want or need, you can quite easily replace with new ones. Although I think to the replacement is unlikely to come to, since the kit has two of them.

At the base of the instrument are two neat brass bushings with 1/4″ and 5/8″ threads, for attaching to various tripods, and other kinds of laser level accessories.
For example, the same company has a very cool universal telescopic pole with a tripod and most importantly with a landing pad with a microlift.

The Kaiweets KT360A laser level is equipped with a lightweight, fast mechanical compensator on magnetic dampers.

The setting speed is about 3 seconds, which is very good.

Each compensator has its own range of operation, here it is ± 4°. This means that whatever way the instrument is tilted, the compensator pendulum will be aligned vertically within this range.

If the laser level is tilted more than 4° to either side, a visual alarm will go off automatically as the laser lines start flashing rapidly. As soon as the instrument is placed on a more level surface the lines will light up statically.

These alarms are designed on purpose so that you do not make critical errors when marking.

The only thing I didn’t like was the fact that the supports on which the compensator is mounted are made of plastic and not metal, as for example in the Huepar LS04CG laser level.

But considering the fact that all 4 supports have reinforcing ribs and the compensator itself is quite light, there is definitely enough safety margin.

There is nothing out of the ordinary here, it’s just like most. A two-position toggle switch and a control panel with two buttons and indicators.

The toggle switch is responsible for locking and unlocking the pendulum and also for turning on the laser level.

The compensator lock is necessary for transporting the device.

And so, let’s get into the details.

Use the “laser” button to switch the planes individually. The algorithm is as follows:

The “p~” button to the right is used to activate the LR100G receiver. The laser beam receiver is sold separately and allows you to work outdoors in sunny weather. (How else to operate the laser level in daylight)

The Kaiweets KT360A laser level has full standard functionality and all the advantages of 3D laser levels over conventional laser crosses.

Perfect for all types of finishing and construction work. In other words, a quality professional laser level 3×360 for daily work.

In terms of functionality it is inferior only to the new 4D laser levels, which already have 4 planes of 360 degrees. If we talk about the maximum functionality, at the moment, this level is Huepar S04CG.

All 360 laser levels with cone prisms do not have the same perimeter brightness. This is such a physical feature of this prism and transmitter design.

Therefore, when testing for laser line brightness, I use 4 measurements, in the following positions:

For a comparison of results with other laser levels, you can see a special brightness table which by the way I am constantly adding new data.

When testing the accuracy of the Kaiweets KT360A laser level, I was surprised again. At a distance of 10 meters (look at the photo) the maximum difference between the points is no more than 1 millimeter!

Both verticals were checked with a plumb line, they are also perfectly adjusted.

And yet, no matter how you spin it, there are cases where you may need to adjust the accuracy. So let’s take it apart too, it’s pretty simple here.

And so, there are two main cases:

1. Coaxial displacement of all planes

Here it is sufficient to adjust the position of the entire pendulum and all the planes fall into place at the same time.

The pendulum position is adjusted here with two bolts and brass cylinders.

That is, you can loosen and move the entire cylinder for a strong offset, and then use the hex bolt in the center to make a fine fine fine adjustment.

In this photo the cross cylinder and the bolt, by moving them you change the roll of the horizontal plane to the right – to the left. You also change the position of the lateral vertical. The front vertical is not affected.

And now you see in the photo below, the cylinder and the bolt of the longitudinal displacement. By moving them the horizon will go up – down. The front vertical will also be affected by moving them. The lateral vertical will remain in place.

2. Separate adjustment of the laser module

If you want to adjust the planes individually, this is done with four screws at the base of each laser module.

There are no definite instructions here, you have to see what the situation is. So, try it and if you see that the plane is going the wrong way, you can always roll it back.

The Kaiweets KT360A laser level is shipped in a cloth bag with polyurethane foam cells inside.

There is no European plug or adapter included, there is no ability to work with simple batteries.

Turn on the subtitles you want and watch. 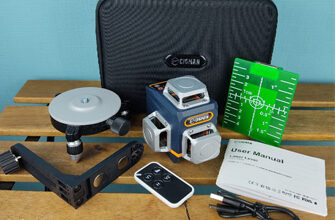 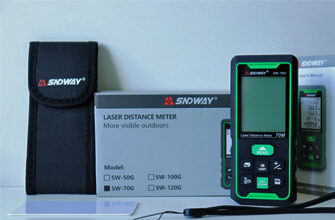